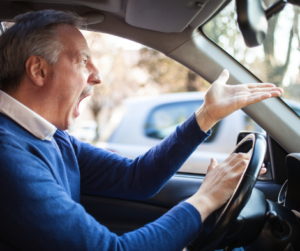 It’s annoying enough to find yourself slowing down in traffic as you drive into a Work Zone. But at least you can see a reason for the snail’s pace of travel. The highway is being made better. New pavement will soon make for a smoother ride.

But as you decelerate into that crawling line of cars, you don’t see any work. There’s no accident. No speed traps. No crowded exit backing up traffic. What’s up?

It’s like a ghost car having fun with us mortals, snarling traffic for miles!

And that’s close to  the truth. The mystery of spontaneous self-snarling can be explained as a common phenomena called “phantom traffic jams.” Or, in more scientific terms, a “jamiton.”

What causes the ghost to rear its frustrating head? The answer lies in the connectivity and dynamic properties of highway driving. Even though multiple lanes may be affected, it can boil down to one driver.

And all that driver has to do is unnecessarily slam on their brakes. Maybe they were on their phone and caught themselves veering off course. Maybe they thought they saw movement, such as a deer at the side of the road. For whatever reason, they apply the brakes.

The problem arises because drivers on crowded highways tend to creep up on each other. The going is smooth but everyone is traveling only one or two car lengths apart.

Then that one driver suddenly brakes. The car behind is too close and it hits the brakes. This happens even if the first driver just taps the brakes then immediately continues forward. The third and fourth cars suddenly and forcefully brake and the ripple effect stretches for hundreds of yards behind that first car.

This can even happen in the other lane of a four lane highway. Drivers see the brake lights ahead or the slowed traffic and they tap their brakes. The conga line of slowed traffic hits the whole highway.

How to Prevent Jamitons in the Utica Area

One thing we’re sure of, you don’t want to be the ghost car that annoys hundreds behind you! Here’s what you can do so that doesn’t happen.

Don’t Tailgate
Don’t follow the car ahead of you too close. This is dangerous for lots of reasons, and it’s why phantom traffic jams happen. That’s because when you see the brake lights go on ahead of you, you have to brake even harder than you would if you were a safer distance behind. This triggers the chain reaction that will upset so many drivers behind you.

Pay Attention to Your Lane
Just because you see brake lights ahead doesn’t mean you will have to apply yours. If you’ve been attentive, you will be able to slow down by lightly tapping the brakes. Or, even better, just lighten up on the accelerator. Depending on the situation, just slowing a bit in traffic may be all that’s necessary. And your brake light doesn’t cause the ripple effect behind you.

The upshot: the best way to avoid causing a phantom traffic jam is to drive a safe distance behind the vehicle in front of you. What’s a safe distance? Just count 3 seconds from when the car in front of you passes a landmark, road sign, or tree. You should pass that same spot in those 3 seconds. Simple as that.

So don’t cause a phantom traffic jam. Be a ghostbuster by keeping a safe distance from the car in front. Especially during this busy holiday season.