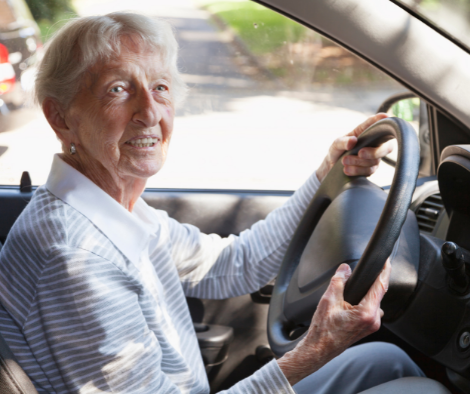 Sleep apnea in the United States is more common now than ever before. A new study links that fact to high risk driving in seniors. The good news is that with Americans more aware of sleep apnea, managing it can save lives on the road.

Sleep apnea is a condition where people wake up in the morning still tired. That’s because during the night, their apnea causes them to briefly stop and then start breathing. This can happen often during the night, even hundreds of times.

The problem is that though people don’t wake up from these interruptions they prevent them from getting a deep, refreshing sleep.

The National Healthy Sleep Awareness Project says that nearly 25 million adults in the U.S. suffer some form of sleep apnea. And they suffer from scores of health problems because of it. These include diabetes, heart disease, and stroke. And, relative to driving a car, it impairs memory, reaction time, and daytime alertness.

So why is sleep apnea more common now? One reason is our country’s increasing rate of obesity. And being overweight is a risk factor in sleep apnea. Another is growing awareness and better diagnostic capabilities. In other words, we know more about the problem now than we ever have before.

You can see how this condition can affect a person’s driving. A study by researchers at Washington University School of Medicine in St. Louis looked at this closely in older adults. That’s because seniors are more prone to get sleep apnea (30% to 50% have at least mild sleep apnea) and they are more likely to be seriously injured or killed in a car accident.

The findings of the study are significant. The researchers monitored the driving and sleep habits of 96 older adults. They used take-home tests to measure sleep and indicate sleep apnea. And installed chips into personal vehicles to monitor their driving.

This despite the fact that the most responsible drivers are age 65 and over. They tend to obey speed limits. They drive defensively. They’re not afraid to say no to driving at night. Or in bad weather and in unfamiliar places.

The problem is that dangerous driving caused by sleep apnea is coupled with other aging related changes. Poorer vision for example. And slower reflexes. So no matter how responsible senior drivers are, their safe habits are often no match for deprived sleep.

So what’s the answer? We think that admitting there’s a problem is the best first step. And don’t forget, if you’re a senior driver with sleep apnea, you join many Americans under age 65 with the same problem. It’s just that with all of the changes that come with aging, sleep apnea is that much more dangerous on the road.

Seniors should have the opportunity to drive for as long as they can. A vehicle offers freedom, independence, and an easy way to maintain social relationships.

But we encourage anyone in our Utica area who has experienced symptoms of sleep apnea to see a doctor. If it’s brought under control you won’t have to suffer the dangerous inattention that can cause harm behind the wheel.

Mohawk Valley Celebrates Earth Day 2022 Mom, They’re Predicting a Tornado! What Should I Do?