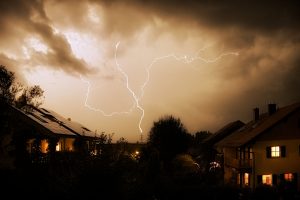 Everything is electric! Our Mohawk Valley homes are powered more than ever with sophisticated kitchen appliances, TVs, computers, and home audio systems. Plugs and batteries all over the house. We watch, listen, and cook with the latest equipment as we relax in our “smart” homes.

Which makes us all the more susceptible to damage from a lightning strike. The Insurance Information Institute reports that in 2016 the value of homeowners insurance claims for lightning damage totaled $825.7 million. That’s for 109,049 claims with an average payout of $7,571.

Bottom line: the cost per residential lightning claim has risen over 40% since 2007. And that’s most likely because of the increase in electronics in homes vulnerable to electrical surges.

According to Strike Check, the most common claim is from a lightning strike that enters the home through wires or pipes that extend outside. These wires can be from the phone, internet, or cable. Or directly from a utility pole into the meter and then the electrical panel. It can even surge through plumbing or metal bars in the foundation.

On top of all of this, Science Magazine predicts that global warming will increase the number of lightning strikes by 12% for every degree of rise in global average air temperature.

So we looked around for some advice on what you can do to protect your home electrical equipment and systems. Here are some tips from the Insurance Institute for Business & Home Safety.

As you might guess, your purchase of a surge protector is not the place to cut corners. If you have a $1,000 television or even more for a sound system, you’ll kick yourself for spending $10 on a cheaper surge protector when $25 would have gotten you better protection.

Finally, if you have invested in sophisticated, expensive home equipment, get a licensed electrician to review the power, telephone, electrical and cable/satellite TV connections.

If lightning does strike your home and your equipment is damaged, you do have coverage on your homeowners insurance policy. If you sustain damage from a power failure that takes place off the residence premises, your policy may not pay. However, we can add off premises power failure for your electrical equipment to most home insurance policies.

Questions? Give us a call. Even if you’re not a client now, we’ll be very glad to help.

And enjoy those movies, songs, and shows!