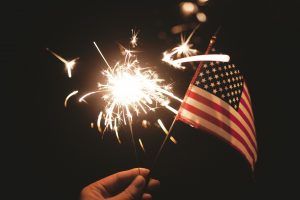 As you probably know, certain fireworks are now legal in Oneida, Herkimer, and Madison Counties. New York State calls the kinds of fireworks you can buy, “Sparkling Devices.”

Some of the names they go by are Totally Circus, Pure Fantasy, and Pip Squeak. Sounds like fun!

According to NYS law, they must be “ground based or handheld devices that produce a shower of white, gold, or colored sparks as their primary pyrotechnic effect. Additional effects may include a colored flame, an audible crackling effect, an audible whistle effect, and smoke.” (Section 270.00 of the NYS Penal Law)

The law goes on to say that sparkling devices do not rise in the air or fire anything into the air. And they do not explode. So what they’re talking about ranges from old fashioned sparklers to more sophisticated showers of sparks.

We are not law enforcement, so we don’t take any responsibility for the partial list below. But the best we can gather on what is legal and what is illegal is:

We are the last ones to put a damper on your parade, but we take safety seriously. (After all, we are in the insurance biz!) So we thought you should know what the National Fire Protection Association (NFPA) says about fireworks and firework safety.

Fact is, thousands of people are injured each year blowing off fireworks. Many of these injuries are serious. According to the NFPA fireworks start an average of 18,500 fires per year. That includes 1,300 structure fires, 300 vehicle fires, and 16,900 outside and other fires. These fires caused $43 million in direct property damage. Of these fires, 25% are reported on…you guessed it…Independence Day.

Another interesting stat is that 74% of the injuries were to males. That doesn’t surprise us either. There is something alluring for men/boys about matches, fire, and booming cherry bombs. Men love pyro!

So we hope you have a bunch of fun this 4th of July. But we are you Trusted Choice insurance agents. We would be remiss if we didn’t point out some safety tips for you to think about before you celebrate. These are from NY.gov and its Department of Homeland Security.

On the last point, there are local suppliers of legal sparkling devices. We suggest you buy from them. You’ll be doing business locally and know you’re getting legal fireworks for Oneida, Madison, or Herkimer Counties.

So have an amazing 4th this year. But when you WOW! them with your sparklers and novelty devices, be careful.

Infotainment and Driving: Can You Do Both? Motorcycle Riding in Central New York