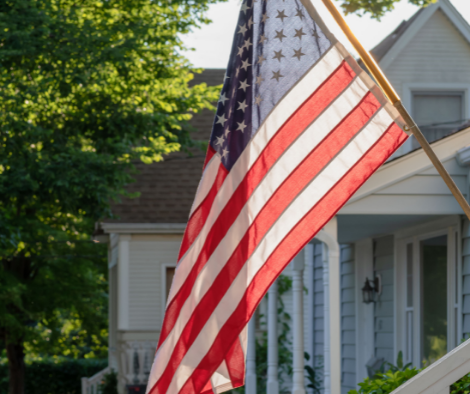 We were happy to see Utica area homes displaying the American flag this Memorial Day weekend. And we’ve noticed lots of homeowners keep them up for the entire summer. Good for them!

For us, the flag honors the sacrifices so many Americans make for our community. Not only the military men and women who serve. But also frontline healthcare workers, first responders, police officers, and so many more.

As you might have guessed, we hope more central New Yorker’s display the flag outside their homes. So we thought it a good idea to brief the community on proper flag etiquette. Probably like you, we knew there are rules but we weren’t quite sure what they actually are.

So we checked out the U. S. Flag Code. Here’s what we found…

How To Display the Flag of the United States of America

How To Respect the Flag

The line in the Code that really stuck with us is this:

“The flag represents a living country and is itself considered a living thing.”

That pretty much says it all. Respect for the flag is the same as respect for all Americans. So this summer we encourage you to display the flag in front of your home. Do it proudly and properly, especially to honor those who serve our great country.