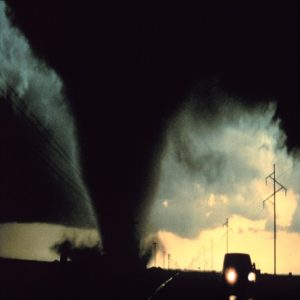 Here’s a headline for an article we saw the other day on www.newyorkupstate.com: “Risk of tornadoes, flash floods increases in Upstate NY in latest forecast.” The article warned of power outages and wind damage if tornadoes formed, including in the Mohawk Valley.

Then we heard about an actual tornado in Constableville in Lewis County on August 16. It had wind speeds of 60 MPH and it cut a 100 square yard path. Part of a cornfield was flattened by it. Officials called it a small rope tornado.

According to the Storm Prediction Center commenting on Constableville, “Tornadoes often assume a ropy, sinuous shape in their final minutes, but can remain narrow like this during their entire life cycles. Although ‘rope’ tornadoes may look weaker than much larger ones, some get more intense as they narrow and tighten (the ice skater effect). With tornadoes, size does not necessarily indicate strength.”

We usually think of tornadoes as a problem in the mid-west, not so much here in the Mohawk Valley. But since one did occurre recently, we turned to the National Severe Storms Laboratory (NSSL) for more info on tornadoes.

What Is A Tornado?

A tornado is a thin, fiercely rotating column of air that reaches the ground from the base of a thunderstorm. Tornadoes are hard to see unless they form a condensation funnel of water droplets, dust, and debris. By the way, the funnel must reach the ground to be called a tornado. If it doesn’t it’s called a funnel cloud.

Believe it or not, tornadoes are the most violent of all atmospheric storms. Capable of furious destruction, they can reach speeds of up to 300 mph. They destroy buildings, uproot trees, and throw vehicles hundreds of yards. They can even drive straw into trees!

About 1,200 tornadoes strike in the U. S. each year. The media has designated most of the mid-west as Tornado Alley, but violent, killer tornadoes can happen anywhere. Just look at Constableville in Northern New York! And they can happen most anytime during the year, day or night. Oddly, they do happen most often between 4 and 9 P.M. Their paths can be over a mile wide and 50 miles long.

Most tornadoes start from thunderstorms, though the NSSL admits that they don’t fully understand how they form. They do think that the more deadly tornadoes come from rotating thunderstorms called supercells with a well-defined radar circulation called a mesocyclone. These supercells can produce hail, unusually frightening lightning, and flash floods even if they don’t turn into tornadoes.

So current theory is that once a mesocyclone is under way, temperature differences along the edge of the downdraft air may cause the tornado. In any case, tornadoes appear as a traditional funnel, or in a slender rope-like form (our Constableville tornado was of the rope-like variety). Some have a churning, smoky look to them and others contain vortices, which are small, individual tornadoes rotating around a common center. Or, some are invisible with their only signs swirling dust or debris at ground level.

Am I Covered for Tornadoes on My Insurance?

Meteorology is a fascinating subject. And with changing weather patterns and climate change, it’s never been more important. Our thanks to all the weather professionals who study it and then warn us of the dangers of oncoming storms. We appreciate your work!