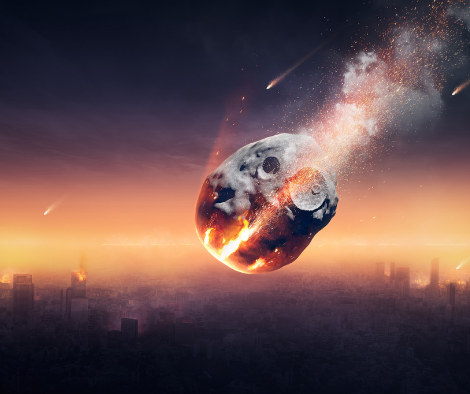 Did you know that meteors from space strike Earth every day? But meteors are not “earth shattering” events. Why? Because by the time they reach us they’re usually too small to see. Or because they strike uninhabited land or the ocean.

Except for one that exploded above Syracuse in December 2020. It shook windows, scattered debris, and created a huge sonic boom. It was one of those rare meteors big enough to see during the day. And it came crashing down half as hot as the sun!

The pieces that fall to the earth are small, about the size of a charcoal briquette. They’re called meteorites and are black and burned looking.

Truth be told, we’ve never heard of a meteorite striking property anywhere here in Utica, New York. But what if it did? Would the damage be covered on your homeowners insurance policy?

Believe it or not, if you have a Broad Form HO-2 or Special Form HO-3 policy, the answer is yes! Falling objects are specifically listed as covered in these homeowners insurance policies.

And that includes from an airplane. Many of us saw in the news that on February 20 at the Denver airport a plane’s engine failed shortly after takeoff, scattering debris on the ground below. A piece struck a house. So that homeowner’s insurance would cover the damage.

What Types of Disasters Does Your Utica Homeowners Insurance Policy Pay For?

So if you’re not likely to suffer damage from a meteorite, what unusual disasters do occur in our area?

For one, vehicles do go off the road and strike homes. Also homes are occasionally vandalized. Though that happens to businesses more frequently since they’re unoccupied at night.

Some of the more common claims here in the Utica area are weight of ice and snow, freezing of plumbing systems, and theft.

One thing we’d like to point out here is that sewer backup is not covered on a standard home insurance policy. And that it is a fairly common, and unpleasant, occurrence. But there is coverage available at very affordable rates.

Call us and we’ll talk about coverage for sewer backup. And some of the other coverages excluded above: like flood and earthquake.

Don’t worry if you don’t have your insurance with us now. We’ll give you a quote and talk about proper insurance amounts for your home here in the Utica area. Lots of people are discovering that just one phone call can get them more coverage and save money.