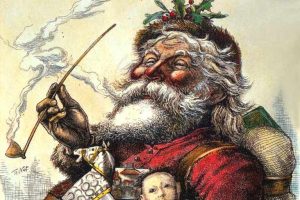 A friend of ours has a nice collection of Christmas books. He brings them out to help him get in the “proper” festive mood this time of year. The other day, he came across a little book of Christmas poems.

It’s called “Lyrics & Legends of Christmas Tide” by Clinton Scollard, published in 1904. And to his surprise, he discovered that Clinton Scollard was born in Clinton, NY and was a professor at Hamilton College.

Well, it turns out that New Yorkers had more to do with Christmas than we realized. For one, Santa Claus as we know him today was born in New York City!

In 1821, Washington Irving wrote a satire called “History of New York.” In it he mentioned St. Nicholas riding his sleigh over the tops of trees. Irving’s Santa smoked a pipe and brought presents to children.

In 1822, on Christmas Eve, Clement Clarke Moore rode a sleigh down to Manhattan from his home in Chelsea (in today’s New York City) to buy a big Christmas turkey. On the way, he made up a poem, probably inspired by Irving’s St. Nick riding the tree tops. He wrote it down after returning home and his family awoke the next day to hear the very first rendition of “Twas the Night Before Christmas.”

Moore was the first to introduce St. Nicholas as we know him today: “Chubby and plump, a right jolly old elf. His eyes how they twinkled, his dimples, how merry. His cheeks were like roses, his nose like a cherry. He had a broad face and a little round belly….”

The best thing about this poem, though, is that it was written for children. Because it became so popular, Christmas morphed from a usually public celebration into a family affair meant for kids. And that’s how we celebrate it today.

There’s one more New Yorker who was a “founding father” of today’s Christmas. That’s Thomas Nast. He was a twenty-two year old editorial cartoonist covering the Civil War for Harper’s Weekly in 1862. His first drawing of Santa Claus published in 1863 has Santa, dressed in stars and stripes, seated in front of Union troops.

But he continued publishing different versions of Santa in finely detailed drawings. These became the prototype for the Santa we know today (see the illustration above).

People loved his jolly Santa climbing down the chimney, distributing presents to the kids, and flying off in his sleigh and eight reindeer. And Nast invented the location of Santa’s workshop at the North Pole and his keeping a book on whether little kids are naughty or nice.

So this Christmas, we encourage the Mohawk Valley to tip a frosty nog to three New Yorkers whose creative, whimsical imaginations gave us our jolly old St. Nick.

And to Washington Irving, Clement Moore, Thomas Nast, our clients and their families, friends, and all Central New Yorkers:

“Happy Christmas to all; and to all a good-night!”

PS Happy Hanukkah to our Jewish friends whose celebration starts this year on December 24.

PPS The history above is taken from the book, “Inventing Christmas: How Our Holiday Came To Be” by Jock Elliott. Published by Harry N. Abrams, Inc.